Indian English Poetry, as a whole, is an IDEA that has always struck me in full glory! And now that I have the honour of conducting my research (within the domain of English literature and comparative analysis with literature in other languages – Hindi preferably), it is is the right time I should take to notice a few quality books published about Indian English poetry. To begin with, I am sharing my views and impressions about one of the highly reputed publications, Indian English Poetry: from the beginnings upto 2000 by M. K. Naik, a reputed scholar and former chair of the English Department at Karnataka University. M. K. Naik’s book is a benchmark. 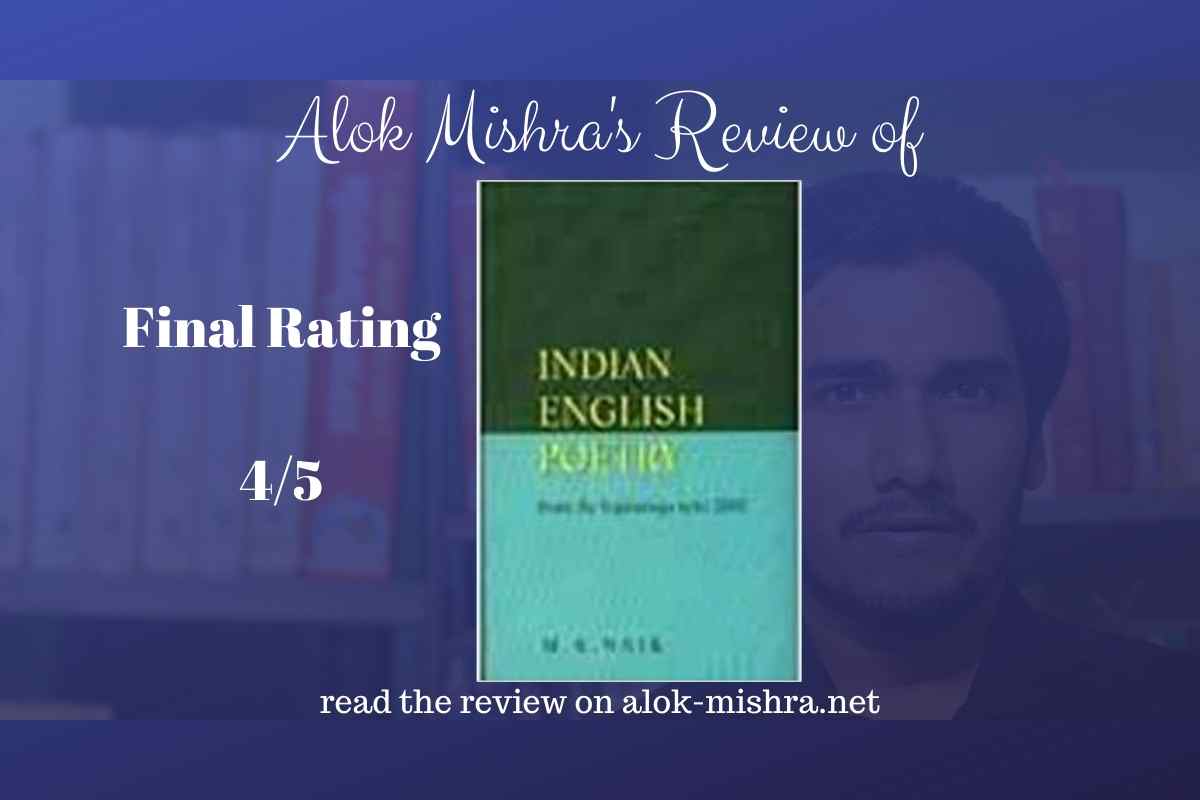 Divided into 16 chapters, the book is better as a step-by-step guide to understanding the evolution of Indian English poetry and also acknowledge the shortcomings that it has. Mr Naik begins with the romantic inclination of the early Indian poets writing in English and moves on from there to the end where we are still confused whether we (that includes me as a poet) are actually Indian poets or not – what makes us Indian and do we really need to be Indians in thoughts and many ‘otherwise’, to be called Indian English poets?

The ideal practice by any recorder of literary history is to begin the writing with the figures who influenced the entire generation. Henry Derozio does the job for M. K. Naik in this book on Indian English Poetry and he introduces the limitlessness and limitations of him and other poets who followed the footsteps of Derozio. Analysis and remarks by Mr Naik are indeed praiseworthy. Coming down to Rabindranath Tagore, M. K. Naik’s observations are quite impressive. He writes:

“Gitanjali is a manual of devotion. The songs in it are firmly rooted in the ancient tradition of Indian saint poetry…” (Naik 19)

Likewise, he continues with his quality analysis of the poetry of some of the great (and also the minor ones) poets who made their marks on the horizon of Indian English poetry and aided to its evolution and progress. Aurobindo, Toru Dutt, M. M. Dutt, Sarojini Naidu, Kamala Das and so on… he also comes down to the modern dawn in Indian English Poetry and analyses the poetry of Nissim Ezekiel, Ramanujan, Daruwala, Mahapatra, Kolatkar and many others for the readers.

What strikes me the most is the sheer sharpness of the careful observation, and yet too candid and frank, that M. K. Naik possesses. He is very clear in what he says and what he conveys. For example, he observes rightly about Dom Moraes:

“The first problem to face in evaluating the work of Moraes is whether he is an Indian English poet at all, because he himself has repeatedly disowned his Indian heritage.” (Naik 54)

He is straightforward in his observation and also striking sharply what needs to be struck in order to give better clarity to the readers. Now, what it does is that awakens the readers to find for the acts (disowning the Indian heritage) in the works by Dom Moraes.

He praises who needs to be praised – P. Lal, for an example. M. K. Naik has also tried to touch down on the modern developed landing sites of Indian English poetry and he takes a glance upon the poetry of Vikram Seth, Tabish Khair and others (worthy and otherwise).

The only drawback that I find in this book is that it is too less in terms of pages and content. Compared to another authoritative work in this area, you will find that Bruce King has done too much and Naik’s book merely hints at things – or, to the maximum, introduces the ideas. King scrutinises and dissects when needed!

To sum up, this is a good stepping stone that will hold the further climb of the interested readers who want to understand Indian English poetry in its glory and its tattered form. What is it right now? Nobody knows! I am sure M. K. Naik’s Indian English Poetry will hold quality for all the readers who go through it. You can buy this book from Amazon India right now:

buy the book – click here to buy from Amazon

I will be back with more reviews in this series as I will be reading many works on Indian English Poetry for my research.

A wonderful book on Indian English Poetry that will interest the readers of Indian English poetry as well as the interested students and academicians who want to know more about its progress and development over time.

Topic: Trying to make out a list of best books to study Geography for UPSC…

Back to normal... Late night and work+poetry mood