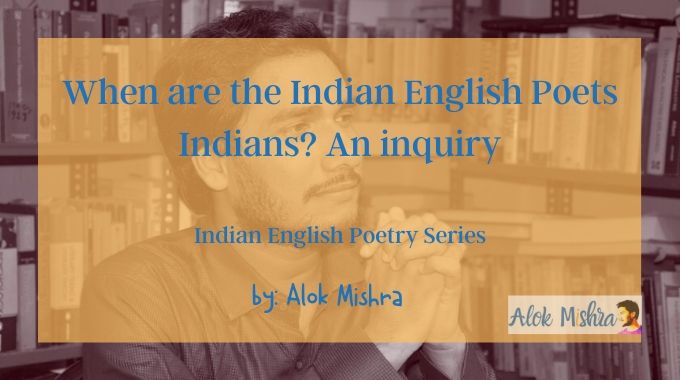 Indian English Poetry has been through different phases and it has yet to reach a conclusive destination where a critic can mark and say, ‘Indian English Poetry is rich in content and diverse in ideas’. Fortunately, we have been diverse in ideas. Unfortunately, we could not be rich in content. Most of the times, Indian English poets spent imitating (which is not wrong) and very little they could spend and encash which they borrowed from others. At times, they were original and when they did so, they created magic with their words dip in the charm of verse that, in turn, produced sonorous symphony to the ears of listeners and reciters, and visually appealing poetry to the soul of the readers. It has been very limited, though, and I call it (like many others have done) the state of Indian poetry being Indian – in originality and in the narrative.

Savitri by Aurobindo, on most of the occasions of all that it offers, displays a remarkable representation of Indian history, culture, ethos and the grandeur of verse that we have been nourishing all our centuries. In one of his many poems, another fine poet writing in English from India, A. K. Ramanujan, writes:

“The legendary tree is upside down.

Roots in the air, branches in the ground.” (Ramanujan 234)

And all of a sudden, a conscious reader will be taken back to the Holy book of Srimad Bhagwad Gita where the Godhead himself announces of such a tree:

Ramanujan talks, further in the poem, of ‘burning the tree of wishful hashish’ and that is something, again, a conscious reader can easily relate to the teachings of our history. And, except at some broken momentum moments, the poem by Ramanujan is magnificent in all its length and breadth! And in doing what – learning from his very own roots and getting inspired by what has inspired the world to look inward and seek everything one wants.

Naturally, a poet writing in any language will write the very best of his verse when he or she looks for inspiration around rather than walking the fairy and fancy lands that Keats used to do (just by reading Homer and other Greeks). So, is the choice of themes that reflect ‘Indian’ emotions and expressions can be called Indianness? Or the ‘Indianness’ that is so-called, can be lost just by using ‘oppressor’s tongue’? Does the language a poet uses matter in forming the overall idea of a poem? Yes, it does and that is why R. Parthsarthy and other poets like him (Sujata Bhatt in line) are constantly in search of their own language that could resonate and reverberate the ‘original ideas’ quickly, effectively and smoothly. Bruce King notes about Parthsarthy in his benchmark work on Indian English poetry, Modern Indian Poetry in English:

“The Indian poet in English feels alienated by his language from the environment and from a living idiom.” (79)

However, there are the poets who don’t invest their words in looking for a language to perfectly and precisely wear their emotions and expressions and ideas. They rather believe in expressing what they have to and what they think they have to. In such a fleet of poets, one can easily find Sarojini Naidu and many of her poems. Naidu’s poetry certainly reflects (seemingly) that her words don’t seek further interpretation and she communicates her ideas gleefully to her readers. In her poems, the emotions seem to overpower the medium, that is the language – English. Writing the last couplet of her wonderful poem Songs of Radha: The Quest, as included in Hari Mohan Prasad’s Edited collection, Indian English Poetry, she has wonderfully expressed the omnipresent and omniscient love of Radha-Krishna:

This should be the perfect ending of what is formed in the poem with 10 couplets by Naidu. And in each of the couplet, the emotions that we Indians generally have for Radha-Krishna and their enchanting love is there – full in its verse’s glory without any trouble of delayed decoding or the fear of leaps or lows in interpretation. So, again, the question is – does a leap in the religious and spiritual past constitute Indianness in Indian English Poetry? Sure! It may be a very big part of it. Indianness, in Indian literature, is simply the idea that connects with Indians, as an audience, instantly; and, it gives the global audience the qualities, the culture, the heritage and the ethos that we cherish as Indians.

Now, all the theories of rootlessness and nostalgia and language barriers may find their conclusions in the idea of approach to one’s poetry. How does and why does a poet see his or her poetry they way it is seen by an individual? Who is the ideal audience? For what purpose the poetry is written? What does a poet want to leave behind as a legacy? And these are the questions that only poets can answer for themselves and we, as critics or readers, can merely speculate and conjecture and formulate the arguments to further deepen the mysteries.

I will write more on the subject as I read more on it. Have a good Friday, you all!

What is Global Literature? If you ask this question to the greatest professor alive, which,…

What form of literary criticism do we mostly use? Close reading method!

How to study literary theory and criticism? Alok Mishra’s Tips

For the students of English literature, one of the most difficult tasks is understanding the…


Error: API requests are being delayed for this account. New posts will not be retrieved.

Something interesting will soon come up here... you will be able to use this button to make things happen...
coming soon...
(C) Alok Mishra, Powered by Best Self-publishing Company in India. 2020 - All Rights Reserved
Back To Top
×Close search
Search
×